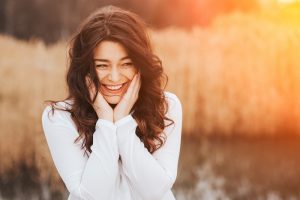 It’s possible to seek out happiness with a little help from positive psychology.

Dr. Martin Seligman, the pioneer of positive psychology, coined that theme in 1998 when he was president of the American Psychological Association. Positive psychology is the branch of psychology that uses scientific understanding and effective intervention to aid in the achievement of a positive outlook… and maintain a sense of optimism that allows for people to understand what makes life worth living.

In this seemingly self-obsessed world where the current political divide is aggressive and social media instantly conveys events without consideration, we all need a little happiness assistance.  According to Kate Bratskeir and Huffington Post, we can increase our happy quotient by shadowing what happier people do:
Surround yourself with other happy people.
Joy is contagious. Researchers of the Framingham Heart Study who investigated the spread of happiness over 20 years found that those who are surrounded by happy people “are more likely to become happy in the future.” This is reason enough to dump the Debbie Downers and spend more time with uplifting people.
Smile, and mean it!
Even if you’re not feeling so chipper, cultivating a happy thought – and then smiling about it – could up your happiness levels and make you more productive. It’s important to be genuine with your grin: The study revealed that faking a smile while experiencing negative emotions could actually worsen your mood.
Cultivate resilience.
According to psychologist Peter Kramer, resilience, not happiness, is the opposite of depression: Happy people know how to bounce back from failure. Resilience is like a padding for the inevitable hardship human beings are bound to face. As the Japanese proverb goes, “Fall seven times and stand up eight.”
Try to be happy.
Yep – it’s as simple as it sounds: just trying to be happy can boost your emotional well-being,according to studies published in The Journal of Positive Psychology. Those who actively tried to feel happier in the studies reported the highest level of positive moods, making a case for thinking yourself happy.
Devote time to giving.
Even though there are only 24 hours in a day, positive people fill some of that time doing good for others, which in return, does some good for the do-gooders themselves. A long-term research project called Americans’ Changing Lives found a bevy of benefits associated with altruism: “Volunteer work was good for both mental and physical health. People of all ages who volunteered were happier and experienced better physical health and less depression,” reports Peggy Thoits, author of the study.
Nix small talk for deeper conversation.
Nothing wrong with shootin’ the you-know-what every now and then, but sitting down to talk about what makes you tick is a prime practice for feeling good about life. A study published in Psychological Science found that those who take part in more substantive conversation and less trivial chit chat experienced more feelings of satisfaction.
Value a good mixtape.
Music is powerful.  So powerful, in fact, that it could match up to the anxiety-reducing effects of massage therapy. Choosing the right tunes could be an important factor, however, a happy or sad song can also affect the way we perceive the world. In one experiment where researchers asked subjects to identify happy or sad faces while listening to music, the participants were more likely to see the faces that matched the “mood” of the music. Click here for a few of our favorite mood-boosting jams.
Unplug.
Taking a few deep breaths away from our screens or deliberately disconnecting from electronics can be very beneficial. Unplugging from our hyper-connected world has proven advantages when it comes to happiness. Talking on your cell phone could increase your blood pressure and raise your stress levels, and uninterrupted screen time has been linked to depression and fatigue.  Technology isn’t going away, but partaking in some kind of a digital detox gives your brain the opportunity to recharge and recover, , which – bonus – could increase your resilience.
Get spiritual.
Studies point to a link between religious and spiritual practice and mirth.  For one, happiness habits like expressing gratitude, compassion and charity are generally promoted in most spiritual conventions. And, asking the big questions helps to give our lives context and meaning.
Make exercise a priority.
A wise, albeit fictional Harvard Law School student said, “Exercise gives you endorphin’s. Endorphin’s make you happy.”  Exercise has been shown to ease symptoms of depression, anxiety, and stress, thanks to various brain chemicals that are released that amplify feelings of happiness and relaxation.
Go outside.
Want to feel alive? Just a 20-minute dose of fresh air promotes a sense of vitality, according to several studies published in the Journal of Environmental Psychology. “Nature is fuel for the soul, ” says Dr. Richard Ryan, the lead author of the studies.
LOL.
You’ve heard it before: Laughter is the best medicine. In the case of The Blues, this may hold some truth. A good, old-fashioned chuckle releases happy brain chemicals that, other than providing the exuberant buzz we seek, make humans better equipped to tolerate both pain and stress.
“Happiness is not a goal; it’s a by-product.”  – Eleanor Roosevelt
Categories: Perspectives | Tags: happiness, mood, and positive psychology
This entry was posted on Tuesday, March 7th, 2017 at 9:54 pm. Both comments and pings are currently closed.