With eternal quests for happiness and satisfaction, we humans consume vitamins, walk or run miles, repeat affirmations, watch soul networks, or practice fake it til we make it?   All the while, without the touch of another human our physical bodies can actually become ill.   Further, touch is found to be one of the most important, effective, and beneficial methods of communication.

Society has become touch-phobic due to the ramifications wrong touches can induce.   We need to shift from an attitude of fear where touch represents abuse or harassment, to an understanding of how crucial touch is to our overall wellbeing.

Physically our bodies are equipped with sensation receptors, that when touched, transmit signals through spinal pathways to the brain.  This act of the touch process decreases cortisol levels (the stress hormone) and increases oxytocin (a hormone that promotes bonding).   Lower cortisol levels contribute to low blood pressure, slower heart rate, and creates a boost in the immune system.  In addition, when touched the parasympathetic nervous system (which controls relaxation) is activated resulting in an increased release of oxytocin, serotonin, and dopamine. Who needs anti-depressants when the feel-good hormones released through the power of touch leave us happy, relaxed, and less anxious.   With frequency these increases in hormones further boost the immune system and lower the risk of depression.  Who needs a hug now??

In a dated study, research suggests that certain brain chemicals released by touch, or others released in its absence, may account for…  infants’ failure to thrive.  This famous study’s findings have been proven again and again, even as recent as 2013.

We can be masters of many things, including non-verbal body language, yet not realize the ability of touch to quickly convey a sentiment.  Through the rapidness of touch, you can quickly communicate a feeling faster than you can say it, and most important, the recipient can process it simultaneously.   A recent study was conducted among NBA basketball players to determine how chest bumps, high fives, and butt slaps impact teamwork and performance.  The findings:  these extensions of sentiment quickly communicate good job, reconnect, and solidify the ultimate goal to win between teammates when words are less efficient and rather useless in the situation.

So a butt slap is not encouraged as it may be misconstrued.  Albeit, a chest bump in some environments and certainly the occasional high five with your coworkers can communicate the same team-support messages.

As we are in Valentine’s week of love,  whether it be a handshake, embracing hug, light arm squeeze,  or a full-blown snuggle with your beloved, do yourself and another person a favor:  reach out and touch someone!

Too often we underestimate the power of a touch, a smile, a kind word, a listening ear, an honest compliment, or the smallest act of caring, all of which have the potential to turn a life around. – Leo Bascaglia 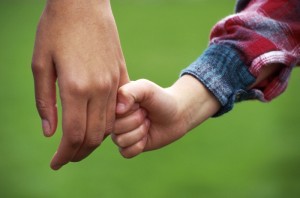 Categories: Self Improvement | Tags: power of touch
This entry was posted on Wednesday, February 11th, 2015 at 3:13 pm. Both comments and pings are currently closed.