Six Food Additives That May Set Us Up for Failure! 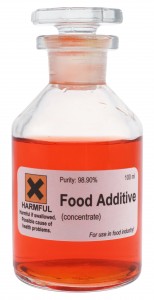 Britain researchers recently conducted a study regarding the effects of food on children’s behavior.  The children who consumed more sugary foods with artificial coloring and other additives experienced 720 total accounts of undesirable or bad behavior compared to the 120 accounts of bad behavior exhibited by the children who consumed healthier foods. Physical aggression, hyperactivity, and a generally poor disposition comprised the bad behavior.  That equates to a difference of 600 bad behavior incidents correlating with the bad food consumed.

Not only does food contribute to behavior, it plays a significant role in mental health. Food aids in the development of short and long-term memory as well as contributes to the development, management, and prevention of several mental health diseases. So how can we increase health prevention and decrease deteriorating development?  The answer isn’t surprising:  By consuming balanced with sufficient amounts of proper nutrients.

Many food additives provide zero nutritional value, yet they are popping-up in approximately 80% of all foods to increase shelf life or enhance taste and appearance.

With all the information connecting food additives and health problems, more Americans should be paying close attention to their food purchases and what they contain.

The Research Group’s team of behavioral experts can help you identify buyer rationale, and POBA’s on health, food, and many other pertinent categories.  Market research is formalized listening, so let’s put forth the effort to listen to our bodies and how they react to the fuel we choose.

Categories: Market Research and The Research Group | Tags: food additive and research
This entry was posted on Tuesday, October 7th, 2014 at 4:56 pm. Both comments and pings are currently closed.